Posted: May 07, 2019 Under: Photography Basics By Robb No Comments

Fast Shutter for Birds In Flight

The exposure triangle comes into play when choosing your shutter speed to ensure proper exposure. As you increase the shutter speed, it is necessary to adjust either ISO or aperture, or both. Let’s look at an example of a bird in flight. A reasonable shutter speed for an eagle in flight is 1/1600 to 1/200 second. With a shutter speed that high, you need a fairly wide aperture or a fast ISO.  Depending on light, you may need both. 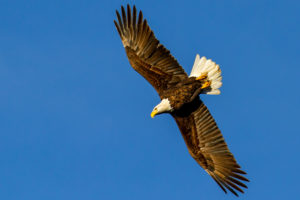 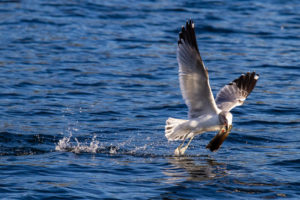 It gets more complicated if it is overcast or early/late time of day. I personally use a Canon 70-200L 4.0 IS USM lens for eagles in flight. I prefer an aperture of f5.6 at minimum, and ideally f8. Using the exposure triangle is mandatory for a low light situation when using a fast shutter speed. Clearly, knowing your camera is critical when making the decision of how to compensate within the exposure triangle. Does your sensor have high ISO capabilities? If not, then you are left with using a fast lens that will allow a wide aperture.

Waterfalls are a good example of a using a slow shutter speed for effect. To soften water flow, generally you need around a quarter of a second.  The longer the exposure, the softer the water will be. Using the exposure triangle, you will need to adjust either the aperture, or the ISO to create a properly exposed image when you do long exposures. In the following examples I wanted to keep the ISO low for a good clear image, so I adjusted the aperture to obtain a good exposure without blowing out the whites or clipping the blacks. 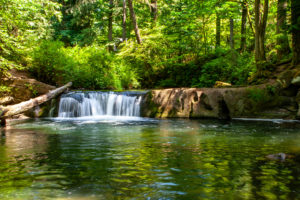 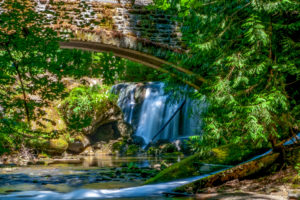 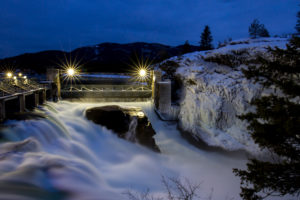 The images above show the effect of longer shutter speeds on flowing water. Longer exposures require the use of a tripod to prevent blur from camera shake.

Bright ambient light will present a problem when shooting with long exposures. When you have closed down the aperture as far as you desire, and tyhe ISO is already to the lowest setting and proper exposure cannot be achieved, you need a Neutral Density filter to block light entering the camera. Neutral density filters are available in 1 full stop increments. For example, a 6 stop ND filter will drop the exposure by 6 full stops.

Keep in mind that aperture, shutter speed and ISO are adjustable in 1/3 stops on a typical DSLR. A 1 second exposure using a 6 stop ND filter will be the equivalent of 15 seconds, and an original exposure at ISO 200, f/16.0, 1/800 second will be equivalent to ISO 200, f/16.0, 1/13 second. Clearly, an ND filter is a great tool to manipulate the exposure triangle to achieve effects in your images.

Proper exposure in landscape photography is essential to create an image that isn’t clipped on the whites or blacks. The triangle comes into play here, just as it does with any other type of photography. Shooting a beach scene can be tricky at times. Often there is a bright background with a dark foreground. It is very easy to have the sky and water blown out to get the foreground exposure correct. Beach scenes like a low ISO. In the image below, I wanted a small aperture for a good Depth of Field, and a low ISO for the beach scene. Using the exposure triangle , it was clear that a shutter speed that was too fast, or too slow would result in either an overexposed or underexposed image. 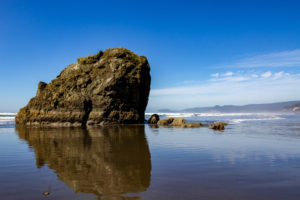 Lenses create limitations in shutter speed as well. Generally you want a shutter speed that is at leas the equivalent of the focal length of you lens. Foe example, a 50mm lens needs a shutter speed ot at leas 1/50 second to prevent a blurry image due to camera shake. A 200mm lens will take 1/200 second os faster. I generally strive fo 1/250 or more with my Canon 70-200 f4L IS USM lens. The image stabilization in that lens will allow for slower shutter speeds, but I still use that as a starting point. I will consider the other two settings of the exposure triangle and use a slower shutter speed if I need to.  My Canon 16-35mm f4L IS USM lens however will produce clear images with a shutter speed as low as 1/10 second. Keeping in mind how aperture affects Depth Of Field, and considering the triangle with that lens, I can get some pretty great shots with a good DOF in low light situations. That is because I know my camera and equipment and apply my experiences to the exposure triangle.

Sports action photography introduces another concern as much of it is done indoors. With the exposure triangle, it is diffcult to get enough light without a large aperture. In the Canon line for example, many sports photographers like the 70-200mm f2.8L IS II USM or the new Canon 70-200mm F/2.8L IS III on a Canon EOS 7D Mark II. The 2.8 f-stop lets in significantly more light than am f4 lens does, and the Mark ii is popular because of it’s high ISO capability with a crop sensor. The crop sensor makes the 200mm focal length equivalent to 320mm on a full frame sensor.

As with anything you do in photography, when using the exposure triangle it is imperative that you know your camera. See my Photography Books page for great sources to learn more about exposure and shutter speed.

This site uses Akismet to reduce spam. Learn how your comment data is processed.